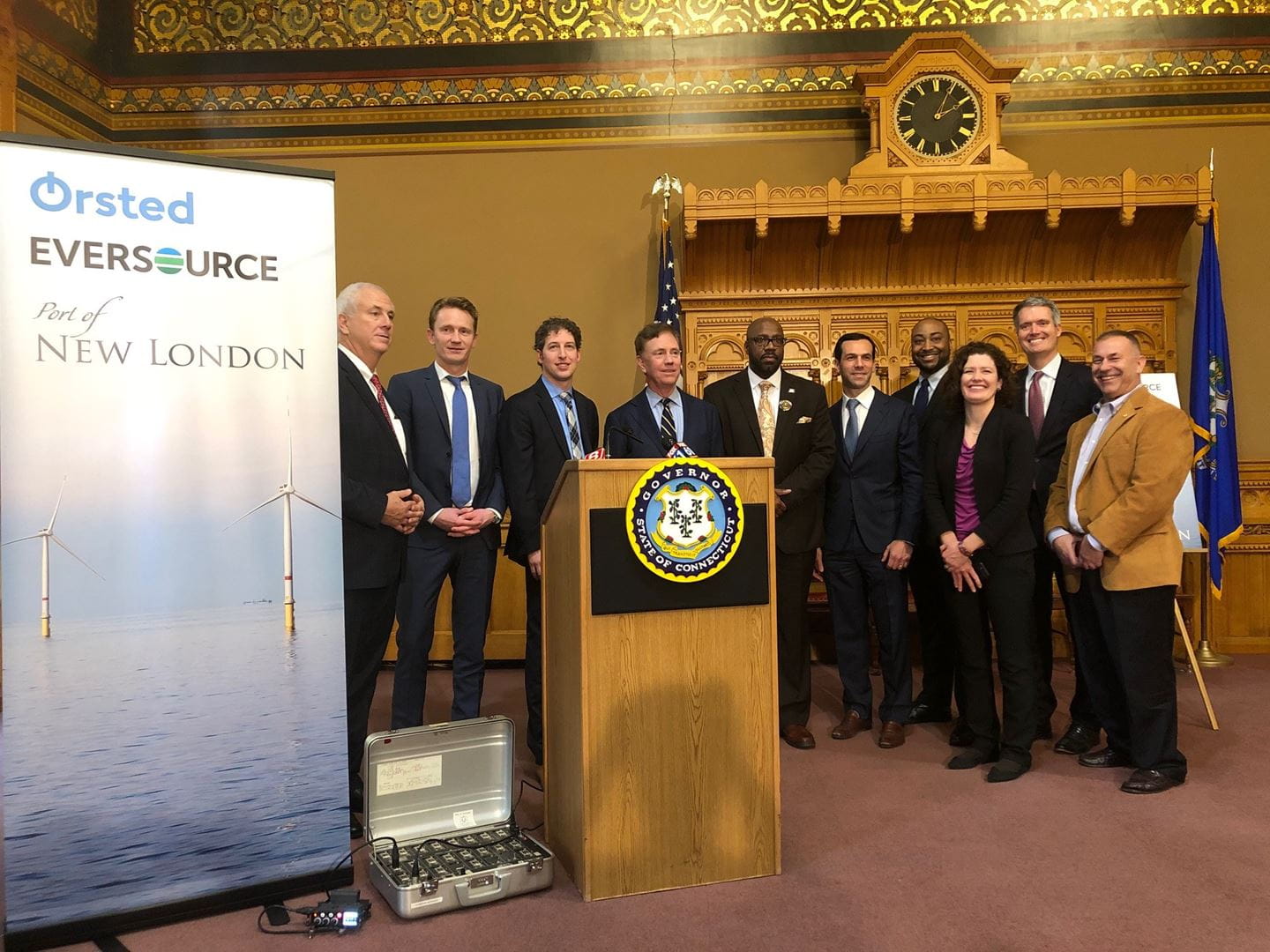 (NEW LONDON, CT) – Governor Ned Lamont today announced that the State of Connecticut and its partners Gateway Terminal, Ørsted, and Eversource have reached a final agreement on a harbor development plan for State Pier in New London that will transform the pier into a world-class offshore wind center and bring hundreds of well-paying jobs to the area.

The Connecticut Port Authority (CPA), the state’s quasi-public agency responsible for promoting and coordinating the development of the state’s ports and maritime industry, terminal operator Gateway Terminal, and joint venture partners Ørsted and Eversource have finalized the agreement to redevelop State Pier into a state-of-the-art port facility through a combined public-private investment of $157 million.

The infrastructure upgrades will re-make State Pier as a modern, heavy-lift capable port and meet the facility requirements of the offshore wind industry. The improvements will benefit the port’s long-term growth by increasing its capacity to accommodate heavy-lift cargo for years to come while maintaining its freight rail link. More than 400 jobs will be created during the construction phase of the project. Construction is expected to begin in early 2021 and be completed by August 2022.

The updated memorandum of understanding reflects crucial feedback from key community partners regarding the importance of the rail link, and more significantly, State Pier’s neighbor, Cross Sound Ferry. The state and its partners worked with Cross Sound Ferry to permit installation vessels to dock on the east side of an upgraded State Pier. This enhanced design best positions State Pier to accept additional heavy lift cargo vessels over the long-term while enabling Cross Sound Ferry to continue to grow its operations in New London.

”Economic growth has remained a top priority throughout my administration, and this agreement paves the way for a surge in activity in New London and Eastern Connecticut that will cement the state’s position as a leader in the industry,” said Governor Ned Lamont. “This new partnership achieves the goal of job growth in a critical part of our state, while making investments in clean energy, showing the world, yet again, that Connecticut will be a leader in addressing climate change.“

“The future of State Pier is vital to the Connecticut Port Authority’s and the state’s success,” said David Kooris, Chair of the CPA. “This tremendous step forward will maximize the location and assets of State Pier, boosting the region’s economy in the process.”

“Connecticut has been attempting to turn the state pier into a world class port to foster economic development for more than a century,” said OPM Deputy Secretary Konstantinos Diamantis. “World and local events have intervened to slow the process and the pier has never been able to deliver on its potential. Now, in 2020, we have the opportunity to finally deliver on this promise. By entering into the Harbor Development Agreement with our partners, we will be able to turn the pier into a wind energy construction hub and serve as a catalyst for other existing businesses in the region. Our experience and expertise will be utilized by CPA to bid, manage, and execute the contracts to redevelop the pier for the lowest cost and ahead of schedule.”

“Like our partner in the State of Connecticut, both Ørsted and Eversource believe taking on climate change is imperative, and offshore wind is one of the solutions that will not only help Connecticut shift away from fossil fuels but also drive significant economic development and local community investment,” said CEO of Ørsted U.S. Offshore Wind Thomas Brostrøm. “We are confident that the revitalization of State Pier will put New London on the map for the offshore wind industry, attracting manufacturers and suppliers to choose the New London region, bringing along economic benefits and growth. We salute Governor Lamont and the State for all their hard work to finalize the agreement and launching Connecticut’s next great maritime industry.”

“In addition to the hundreds of well-paying, local jobs that will be created to construct our wind projects out of State Pier, we have also committed millions in local community investments as part of our Revolution Wind project and we will be partnering with local companies to develop a local offshore wind supply chain,” said Eversource Executive Vice President of Strategy, Customer & Corporate Relations Joe Nolan. “We look forward to continuing our collaboration with the state, the Connecticut Port Authority, Gateway Terminal and other local partners  to bring the offshore wind industry toConnecticut’s shores, advance our clean energy economy and achieve our climate goals.”

“As the terminal operator of State Pier, Gateway is focused on maximizing port activity,” said Co-CEOs of Enstructure, Gateway’s parent company, Matthew Satnick and Philippe De Montigny.  “Our partnership with the State of Connecticut, Ørsted and Eversource to transform State Pier into an offshore wind assembly hub will unlock an unparalleled growth opportunity for New London and its surrounding communities.  We expect a meaningful increase in vessel traffic, which will lead to job creation and an increase in revenue for both the Connecticut Port Authority and the City of New London.  Aside from capitalizing on the high-growth offshore wind industry, State Pier will be better positioned to handle conventional cargo. We appreciate the hard work of Governor Lamont and his team to finalize the tri-party partnership and believe that the Lamont administration’s leadership in redeveloping State Pier will have a lasting impact on the Connecticut economy for generations to come.”

The first phase of construction to complete the facility infrastructure upgrades to meet the heavy-lift requirements of Ørsted and Eversource’s offshore wind components will begin in early 2021 and continue through August 2022. The CPA will oversee the project while working closely and in collaboration with Ørsted and Eversource throughout the permitting and construction process. Permitting and site investigations have been underway since 2019, and the contractor selection process will begin in late 2020.

Following the completion of the infrastructure upgrade project, the Ørsted and Eversource joint venture company will enter into a ten-year lease agreement, which will allow it to use State Pier for wind turbine generator pre-assembly and staging to power their Revolution Wind, Sunrise Wind, and South Fork Wind projects – more than 1,700 megawatts total of clean, offshore wind power including 304 megawatts coming to Connecticut through Revolution Wind. Approximately 400 new offshore wind-related jobs are anticipated to be created at the site as the result of these wind projects. During periods where Ørsted and Eversource are not using State Pier, Gateway Terminal will market the facility to other customers to ensure maximum utilization of State Pier.