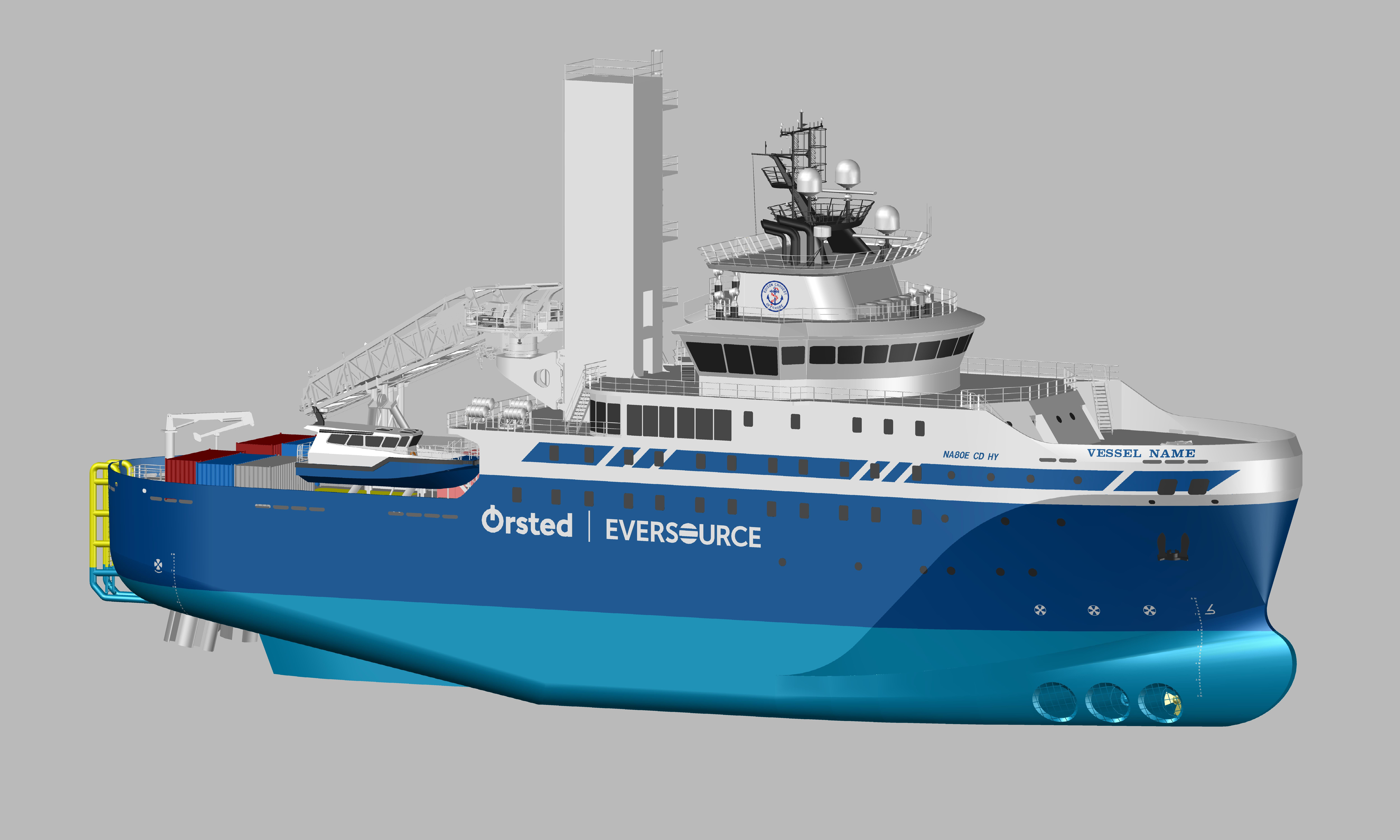 Cut Off, Louisiana — Edison Chouest Offshore (ECO), Ørsted and Eversource announced today the execution of a long-term charter agreement for the provision of the first-ever U.S. flagged “Jones Act” compliant Service Operations Vessel (SOV). The SOV will be engineered, constructed and operated by ECO as an integral part of the operation and maintenance of the Revolution Wind, South Fork Wind and Sunrise Wind offshore wind farms in the northeast United States, which are dependent on obtaining the necessary federal permits from the Bureau of Ocean Energy Management (BOEM).

The SOV will be utilized during the operation & maintenance (O&M) phases of the wind farm projects, serving as an at sea base of operations to accommodate and transfer technicians, tools and parts safely to and from the individual Wind Turbine Generators. This vessel is a special-purpose design with focus on passenger comfort and safety, enhanced maneuverability and ship motions, extended offshore endurance and reduced emissions.

The vessel will be built at a combination of Edison Chouest’s shipyards in Florida, Mississippi and Louisiana, creating well over 300 new construction jobs. The construction of this vessel will also have a broader economic impact on other U.S. states hosting suppliers of major components, with some notable beneficiaries being North Carolina and Illinois for steel and main engines, respectively. While the offshore wind industry is relatively new to the United States, states in the Gulf of Mexico region, who have a long history in offshore related industries, stand to immediately gain from the high transferability of existing jobs over to offshore wind. In addition to jobs created in Louisiana, the vessel will operate from New York once in operation.

“The offshore wind energy industry is generally well developed and understood, particularly in Europe where an enormous industry has developed over decades, but this industry is in an initial stage in the United States. There is an unprecedented opportunity, with twelve offshore wind projects planned, an additional ten offshore wind leases signed, and another six wind leases awaiting award. In aggregate, there is a pipeline of well over 25 thousand megawatts of power to be produced by over 1,700 wind turbines, across thirteen states, and in various stages of development that will require an incredible array of vessels, resources, knowledge, and capital commitment to install, operate, and repair,” says Mr. Gary Chouest, President of Edison Chouest Offshore. “We’re unique in the U.S. offshore marine vessel industry with our own in-house engineering group, our own shipyards, and a wealth of expertise in the offshore industry putting us in a dominant position in the industry with the unique capability to engineer, construct and operate specialized vessels for this market.”

The vessel will be over 260 feet long and capable of housing 60 passengers. Crew will enjoy access to passenger staterooms with private bathrooms, an exercise room, cinema/training room, internet café and multiple lounges. The SOV will include a below deck warehouse to palletize storage for wind farm tools, components and supplies with step-less access to an elevator. A Daughter Craft, with associated Launch and Recovery System and hydraulic height-compensating landing platform, will also be installed for infield turbine repair operations. In keeping with the environmental goals of the offshore wind industry, this vessel will operate on diesel electric power that meets EPA Tier 4 emission standards and will feature proprietary ECO Variable Frequency Drive (VFD) to reduce greenhouse gas emissions.

“This is an incredible moment for the American offshore wind industry,” said Thomas Brostrøm, CEO of Ørsted North America, Offshore. “It is hard to state what this moment means for this new, multi- billion-dollar industry. The SOV is not only a crucial part of our plans to build out and operate our Northeast Wind Farms, but it represents just how far reaching the economic impacts of offshore wind can be; offshore wind means massive investments for U.S. companies and jobs for American workers, even those in states without active projects.”

“Today’s news represents a key moment in the advancement of the offshore wind industry in the United States,” said Joe Nolan, Executive Vice President at Eversource Energy. “Not only is this new vessel a critical component of our plans to build and develop the next generation of clean energy in our country, it’s a testament to how far the industry has come in such a short time and what we can achieve moving forward. This new state of the art vessel will help us deliver on the promise of creating jobs, driving economic growth, and combating climate change and will play a key role in our efforts to support states in meeting their commitment to decarbonization.”

About Edison Chouest Offshore
Founded as Edison Chouest Boat Rental in 1960, ECO is recognized today as the most diverse and dynamic marine transportation solution provider in the world. ECO operates a growing fleet of almost 300 vessels, up to 525 feet in length, and serving an expanding global customer base. ECO is the largest provider of U.S. ‘Jones Act’ compliant offshore marine vessels, the largest provider of offshore marine service vessels to Central and South American markets, has the largest base of shipyards in the U.S., owns and manages world-class port terminal facilities and operates worldwide on all oceans, including the Arctic and Antarctic regions. Staying on the forefront of new technologies is an integral part of the ECO vision, as evidenced by recent advances in the areas of emissions reductions, subsea support services, integrated bridge systems, remote monitoring of vessel systems and global communications. Please visit Edison Chouest Offshore’s website at www.chouest.com.

About Ørsted North America, Offshore
The Ørsted vision is a world that runs entirely on green energy. Ørsted ranks #1 in Corporate Knights’ 2020 index of the Global 100 most sustainable corporations in the world and is recognized on the CDP Climate Change A List as a global leader on climate action.

In the United States, Ørsted operates the Block Island Wind Farm, America’s first offshore wind farm, and constructed the two-turbine Coastal Virginia Offshore Wind pilot project – the first turbines to be installed in federal waters. Ørsted has secured over 2,900 megawatts of additional capacity through five projects in the Northeast and Mid-Atlantic. Ørsted’s North American Offshore business is jointly headquartered in Boston, Massachusetts and Providence, Rhode Island and employs more than 150 people. To learn more visit us.orsted.com or follow us on Facebook, Instagram and Twitter (@OrstedUS).

About Eversource
Eversource (NYSE: ES), celebrated as a national leader for its corporate citizenship, is the #1 energy company in Newsweek’s list of America’s Most Responsible Companies for 2020 and recognized as one of America’s Most JUST Companies and the #1 utility by Forbes and JUST Capital. Eversource transmits and delivers electricity to 1.25 million customers in 149 cities and towns, provides natural gas to 237,000 customers in 74 communities, and supplies water to approximately 199,000 customers in 52 communities across Connecticut. Eversource harnesses the commitment of approximately 8,300 employees across three states to build a single, united company around the mission of safely delivering reliable energy and water with superior customer service. The #1 energy efficiency provider in the nation, the company is empowering a clean energy future in the Northeast, with nationally-recognized energy efficiency solutions and successful programs to integrate new clean energy resources like solar, offshore wind, electric vehicles and battery storage, into the electric system. For more information, please visit eversource.com, and follow us on Twitter, Facebook, Instagram, and LinkedIn. For more information on our water services, visit aquarionwater.com.