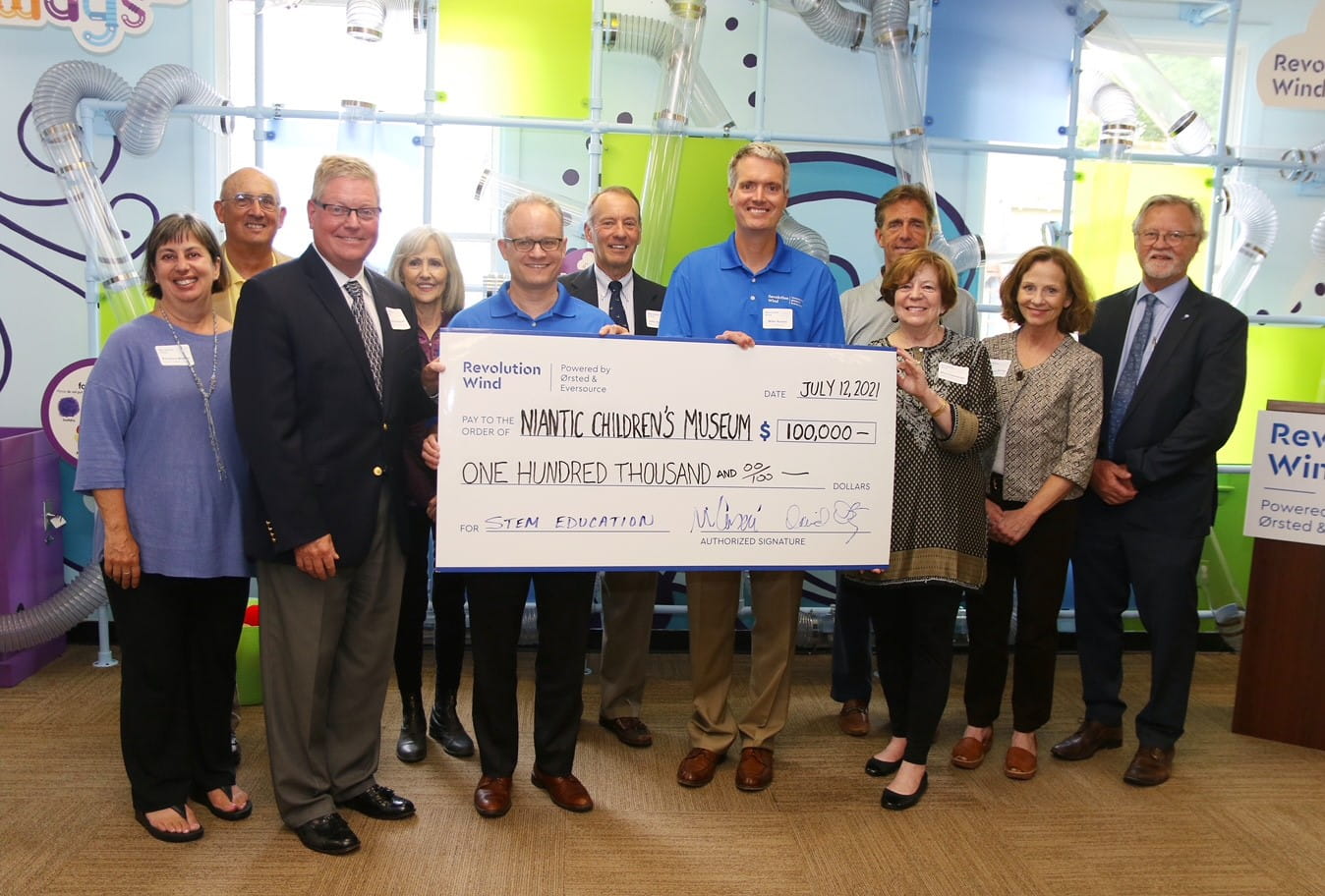 NIANTIC, CONN. – July 12, 2021 – Offshore wind joint development partners Ørsted and Eversource today announced that they have awarded a $100,000 grant to the Niantic Children’s Museum. The award will support the creation of several new hands-on, STEM-focused exhibits that will help educate and inspire the next generation of scientific leaders. The grant will initially be used to support the museum’s “A-Mazing Airways” exhibit that will explore the science of air and the role that Earth’s natural resources can play in combating climate change.

The grant is the latest in a series of local community commitments from Ørsted and Eversource as they develop Connecticut’s first offshore wind farm, Revolution Wind. The two developers recently announced STEM-centric community partnerships with both Mystic Aquarium and Project Oceanology.

The A-Mazing Airways exhibit features a transparent tube system with diverter boxes that children can open and close to change the pathway of balls, scarves and other objects that move through the tubes using air power. The exhibit also includes educational programming on the role of wind power in generating clean energy.

The exhibit was unveiled today during a ribbon-cutting ceremony as the museum kicks off its Sustainability Week featuring hands-on crafts, interactive floor stations and educator-led demonstrations involving wind power, the environment, recycling and more.

“As children interact with the A-Mazing Airways exhibit, they will engage in the scientific process, test their hypotheses and learn about the science and power of air and airflow, including its use to generate electricity,” said Niantic Children’s Museum Board President John Burkhardt. “This signature exhibit will be the focus of our larger exhibit space, the Imagination Room. We are grateful for our partnership with Ørsted and Eversource as we provide children and families with fun STEM-learning opportunities through A-Mazing Airways and future exhibits.”

“This new exhibit at the Niantic Children’s Museum takes a closer look at a vital resource that we often take for granted,” said David Ortiz, Ørsted’s Head of Market Affairs for New England. “A-Mazing Airways will help children understand and explore the scientific concept of wind power, which is the cornerstone of our offshore wind projects that will address climate change and help meet Connecticut’s clean energy goals.”

“Eversource and Ørsted believe that serving the local community, especially through STEM educational initiatives, is an essential part of our commitment to Connecticut,” said Michael Ausere, Vice President of Business Development at Eversource Energy. “We are excited to partner with the Niantic Children’s Museum on A-Mazing Airways and future exhibits that will introduce our children to the pivotal role that the Earth’s natural resources can play in helping tackle the growing climate crisis.”

Ørsted and Eversource’s Revolution Wind project will deliver 304 megawatts of clean energy to Connecticut and 400 megawatts to Rhode Island, generating enough electricity to power more than 350,000 homes across both states.

The Niantic Children's Museum is an interactive, hands-on, educational place for children ages nine months to nine years to make fun discoveries and let their imaginations soar. Located in Niantic, Conn., the museum is comprised of 5,000 square feet and an outdoor playspace. For more information about the museum, visit NinaticKids.org.

The Ørsted vision is a world that runs entirely on green energy. Ørsted ranks as the world’s most sustainable energy company in Corporate Knights’ 2021 Global 100 index of the most sustainable corporations and is recognized on the CDP Climate Change A List as a global leader on climate action. In the United States, Ørsted operates the Block Island Wind Farm, America’s first offshore wind farm, and constructed the two-turbine Coastal Virginia Offshore Wind pilot project – the first turbines to be installed in federal waters. Ørsted has secured over 2,900 megawatts of additional capacity through five projects in the Northeast and Mid-Atlantic. Ørsted Offshore’s North American business is jointly headquartered in Boston, Massachusetts and Providence, Rhode Island and employs more than 150 people. To learn more visit us.orsted.com or follow us on Facebook, Instagram and Twitter (@OrstedUS).

Eversource (NYSE: ES) transmits and delivers electricity and natural gas and supplies water to approximately 4.3 million customers in Connecticut, Massachusetts and New Hampshire. Celebrated as a national leader for its corporate citizenship, Eversource is the #1 energy company in Newsweek’s list of America’s Most Responsible Companies for 2020 and recognized as one of America’s Most JUST Companies. The #1 energy efficiency provider in the nation, Eversource harnesses the commitment of approximately 9,000 employees across three states to build a single, united company around the mission of safely delivering reliable energy and water with superior customer service. The company is empowering a clean energy future in the Northeast, with nationally-recognized energy efficiency solutions and successful programs to integrate new clean energy resources like solar, offshore wind, electric vehicles and battery storage, into the electric system. For more information, please visit eversource.com, and follow us on Twitter, Facebook, Instagram, and LinkedIn. For more information on our water services, visit aquarionwater.com.

Media Contact
Justin May, on behalf of Ørsted and Eversource
jmay@gbpr.com
860-839-1538