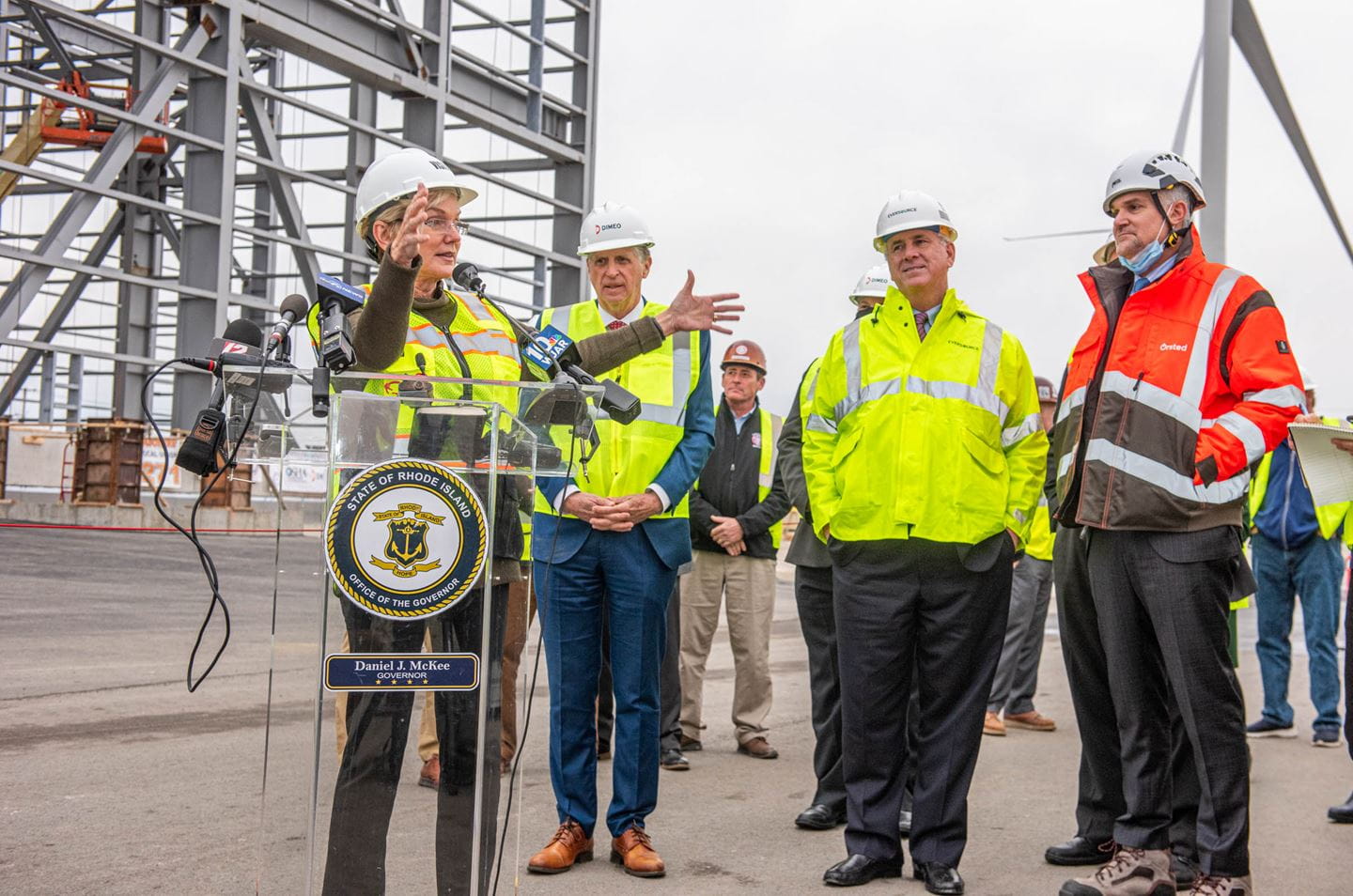 Once complete, the new facility will be used to support construction of advanced foundation components, large-scale and specialized components that are integral to foundations for Ørsted and Eversource’s portfolio of offshore wind farms serving Rhode Island, Connecticut and New York. The bipartisan Infrastructure Investment and Jobs Act recently signed into law by President Joe Biden will help accelerate port upgrades, electrical grid infrastructure and much more to expedite the delivery of offshore wind energy as a way to combat climate change and reduce air pollution.

The site upgrades and construction underway at ProvPort are covered by a Project Labor Agreement that Ørsted and Eversource reached with the Rhode Island Building and Construction Trades Council and the project’s general contractor Dimeo Construction – ensuring that all the work is being completed by local, union labor. This initial scope of work has created 40 local jobs.

“I want to thank Secretary Granholm and Governor McKee for touring our site today along with our labor partners who will help deliver America‘s green transformation,” said David Hardy, Chief Executive Officer of Ørsted Offshore North America. “Rhode Island is home to America’s First Offshore Wind Farm, which was commissioned on December 12, 2016. Five years later, it is fitting that we showcased our ProvPort facility today and its growing capabilities that will further establish Rhode Island as a regional offshore wind energy hub. Our investments into the port and community, combined with support from local, state and federal leaders, are making our clean energy vision a reality.”

“The Biden Administration has been a relentless champion for clean, renewable energy with offshore wind as its bedrock,” said Joe Nolan, Chief Executive Officer and President of Eversource Energy. “We are thrilled today to showcase some of the tremendous work already underway in Rhode Island that, together with other regional investments, is playing a critical role in combating climate change, growing the domestic supply chain, and creating well-paying, local jobs.”

In total, Ørsted and Eversource are investing a combined $40 million at ProvPort and Quonset Point, in North Kingstown, R.I., to support the development of the Revolution Wind project serving Rhode Island and Connecticut, as well as the South Fork Wind project serving New York.

The Ørsted vision is a world that runs entirely on green energy. Ørsted ranks as the world’s most sustainable energy company in Corporate Knights’ 2021 Global 100 index of the most sustainable corporations and is recognized on the CDP Climate Change A List as a global leader on climate action.

In the United States, Ørsted operates the Block Island Wind Farm, America’s first offshore wind farm, and constructed the two-turbine Coastal Virginia Offshore Wind pilot project – the first turbines to be installed in federal waters.  Ørsted has secured over 4,000 megawatts of additional capacity through six projects in the Northeast and Mid-Atlantic. Ørsted Offshore’s North American business is jointly headquartered in Boston, Massachusetts and Providence, Rhode Island and employs more than 250 people. To learn more visit us.orsted.com or follow us on Facebook, Instagram and Twitter (@OrstedUS).

Eversource (NYSE: ES) transmits and delivers electricity and natural gas and supplies water to approximately 4.3 million customers in Connecticut, Massachusetts and New Hampshire. Celebrated as a national leader for its corporate citizenship, Eversource is the #1 energy company in Newsweek’s list of America’s Most Responsible Companies for 2021 and recognized as one of America’s Most JUST Companies. The #1 energy efficiency provider in the nation, Eversource harnesses the commitment of approximately 9,300 employees across three states to build a single, united company around the mission of safely delivering reliable energy and water with superior customer service. The company is empowering a clean energy future in the Northeast, with nationally recognized energy efficiency solutions and successful programs to integrate new clean energy resources like solar, offshore wind, electric vehicles and battery storage, into the electric system. For more information, please visit eversource.com, and follow us on Twitter, Facebook, Instagram, and LinkedIn. For more information on our water services, visit aquarionwater.com